skip to main | skip to sidebar

The students and staff are dropping like flies at an all-girl's college: They are being gassed with an unusual poison and having their necks snapped by a mysterious, whip-wielding figure in a red cloak and hood. Will brilliant sleuth Inspector Higgins (Fuchsburger) find the connection between the killings and find the murderers before so many of the characters are killed there won't be a mystery left? 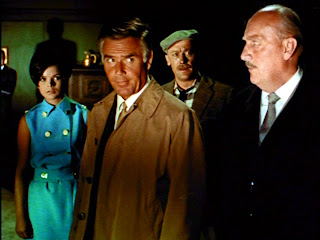 "The College Girl Murders" is a mess of a movie that fails at whatever it is it's trying to be. As a comedy spoofing mystery movies, it fails because it isn't very funny. It also fails as a mystery movie, it collapses under its own ludicrous, far-fetched storyline (which involves a mysterious mastermind who commands a network of minions from his secret, fishtank-lined lair, a character dressed in a red KKK robe-like outfit who murders people by snapping their necks with a bullwhip, and a scientist who invents a deadly new gas that is used on unspecting college girls via trick bibles and goofy-looking sprayguns.

(Actually, that list of negatives sounds like any number of movies I like, but it's the presence of all those elements in a single film that I think sours me on them. I like curry and I like chocolate ice cream... but I wouldn't want chocolate ice cream in my curry.)

On the upside, the movie does spare us the go-go dance scene that most 1960s era movies of this type feature. It also features some nice sets--the villain's lair is interesting, and the access point to the ultimately pointless plot-wise secret passageways within the girl's dormatory is also nifty. The camera-work and lighting are well done--with a night scene where one of the characters is being chased both by the whip-wiedling monk and a gas pistol-weilding thug managing to bring some real tension to the film--and the actors also perform their parts adequately, both the Germans on the screen and the Americans doing the dubbing. 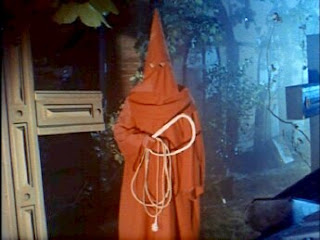 The film is also fairly fast paced, and it kept my attention throughout... even if part of the reason I kept watching was to see if the film could get any dumber. (It didn't dissapoint; toward the end, a couple of twists are offered that are stupendously idiotic.)

I can't really recommend this movie to anyone. It's technically well made with average acting all around, but the story is too silly, and un-funny, to make it worthwhile.
Posted by Steve Miller at 2:53 AM 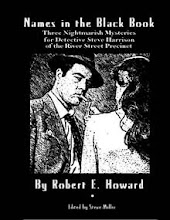 AN E-BOOK OF HORROR-TINGED DETECTIVE FICTION FROM
ROBERT E. HOWARD.

Steve Miller
The Once and Future Writer of Stuff.

Alfred Hitchcock in
Black and White

Click picture to read reviews at
Shades of Gray

Other Blogs of Interest